From Zero to Spock

How to configure and set up an Amazon EC2 server with SSH keys for Statamic and Git Integration for Spock.

To get started we need to launch our EC2 instance on Amazon. We’ll use a Amazon Linux 2 AMI (x86) image on the t2.micro plan because it’s included in the free tier. Click Review and Launch and we’ll configure the rest later. 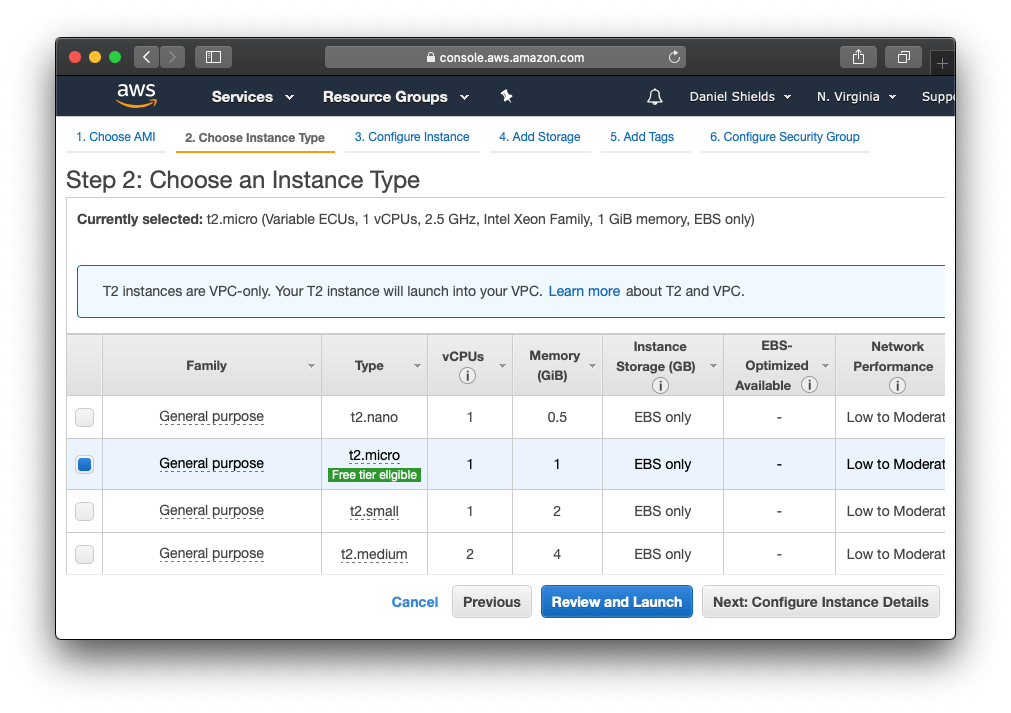 You’ll be asked to download a new key pair, and we’ll use this to SSH into the server. I’ll call mine radiant-sun for this gist. You’ll need to keep this secure, so move it to a safe place. 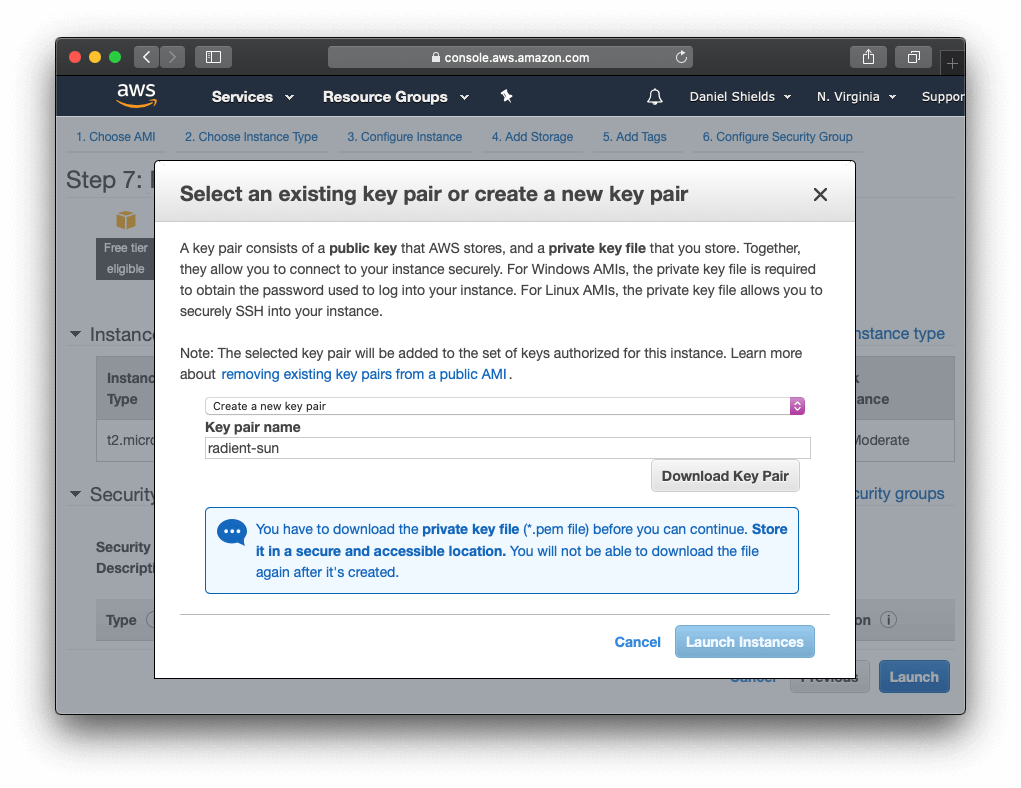 The next thing we want to do is edit the default security group, if you haven’t already created one.
All we want to do is add HTTP and HTTPS access to our inbound rules, and we can remove HTTP access once we set up SSL certificates later. 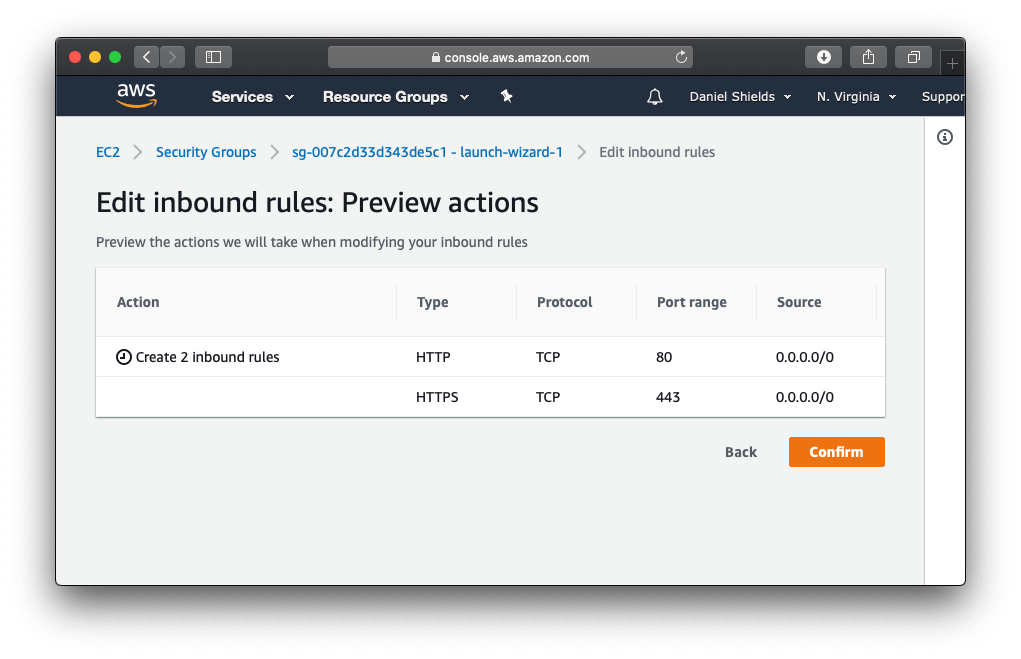 First, you need to make your Key Pair file secure (read-only and not accessible by others) by entering:

Then, access your instance using your Key Pair file and the IPv4 Public IP of your EC2 Instance:

After the instance is finished launching, you can find the IPv4 address on the EC2 Instances page.

Let’s get started and update the new server.

We’re going to use Apache to run the Statamic website, so next we’ll install Apache and SSL module.

Check if Apache is running

If it returns “disabled”, which it should the first time… enable Apache so it starts each time the system boots.

Otherwise, normally you can just restart Apache like this if needed

If you visit the server IPv4 you should now see the Apache test page. 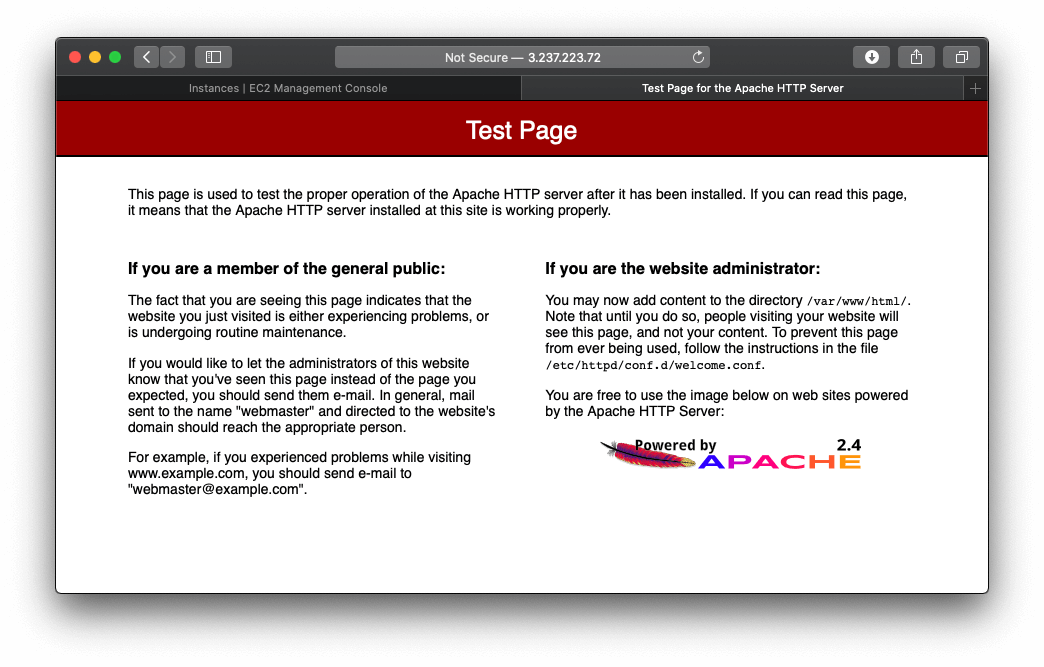 One last thing we need to do before we continue to update the memory limit or we’ll have problems when we try composer install the project later on.

Update the PHP memory limit in /etc/php.ini or run php --ini to find your config file if you’re using a different type of server.

Our tiny t2.micro server only has 1GB of ram but we need to push it to the limit to run Laravel and Statamic, otherwise our composer installations fail.

Install Node and NPM so it’s available to all users.

Something else we need to do to let composer run under the apache user is create a cache directory and make it writable:

This prevents these errors from appearing when we run composer install later on.

Now we’re ready to start setting up the SSH keys so we can clone our project and configure them so Statamic can push back changes on the control panel back to git. This is the Git Integration available in Statamic v3, but these steps should work for anyone having trouble with Statamic v2 and Spock.

They key to get this working with Statamic is to make Apache the owner of the website and SSH keys, otherwise Statamic will fail with this common error:

Since the Apache SSH folder it doesn’t exists by default on the Amazon AMI, let’s create it.

Normally we would use the ~/.ssh folder, which the server will still use for normal SSH functions, and so you can SSH into the server. So it’s important that ~/.ssh is owned by ec2-user and /usr/share/httpd/.ssh is owned by the apache user.

I’m using user apache here but this may differ if you’re on another server type. So you can always check who the apache user is before assigning the users.

You can either try:

Otherwise this should automate the process and print the apache user: 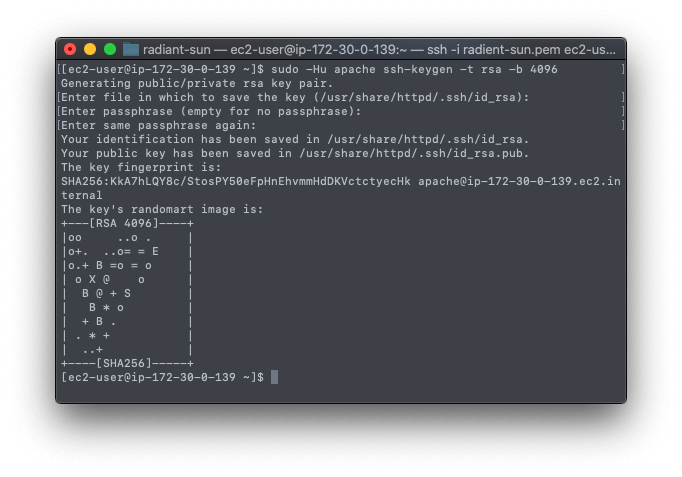 When you are asked for the passphrase, just press enter to make a key without a password.

When you run this command from the root directory, it should generate the keys in the correct folders.

Otherwise move the keys there manually.

Now, you’ll need to add the key as a “deploy key” to your project on GitHub.

For the rest of the tutorial, I’ll clone the Statamic Cool Writings demo and use that. 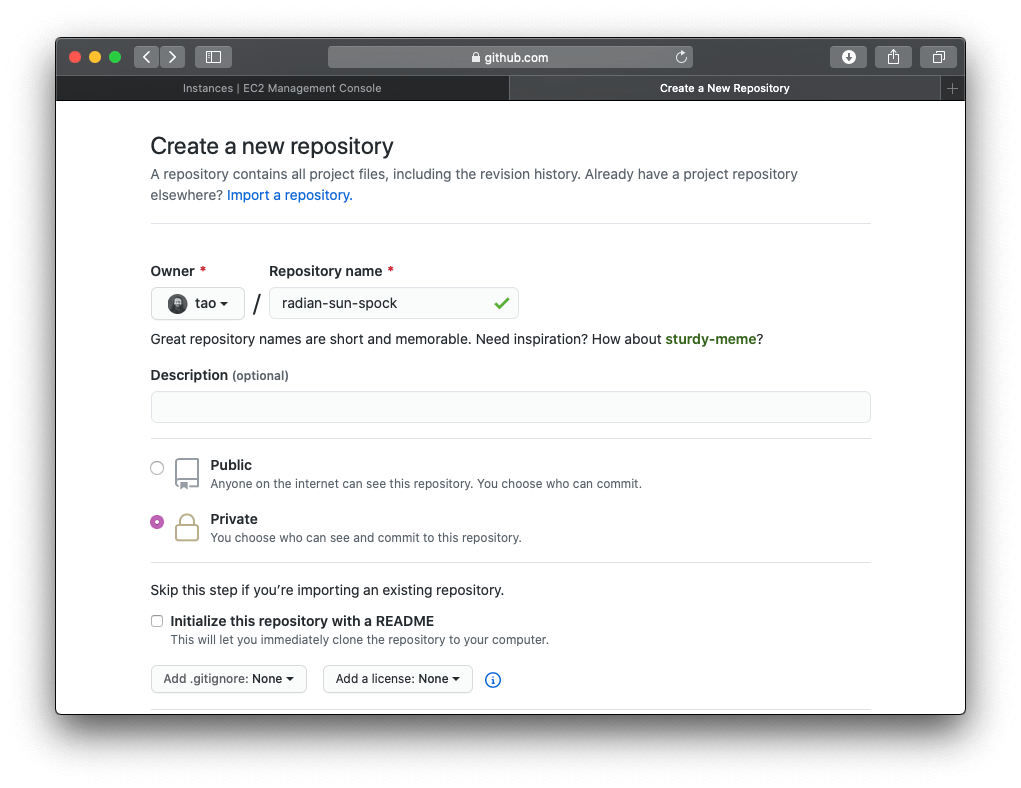 All I’m doing here is cloning the project to my local machine so I can push it to my private repository.

One important thing to note here is that I run composer install before I commit the project, that’s because we need a composer.lock file as our tiny server doesn’t have enough memory to do this itself. 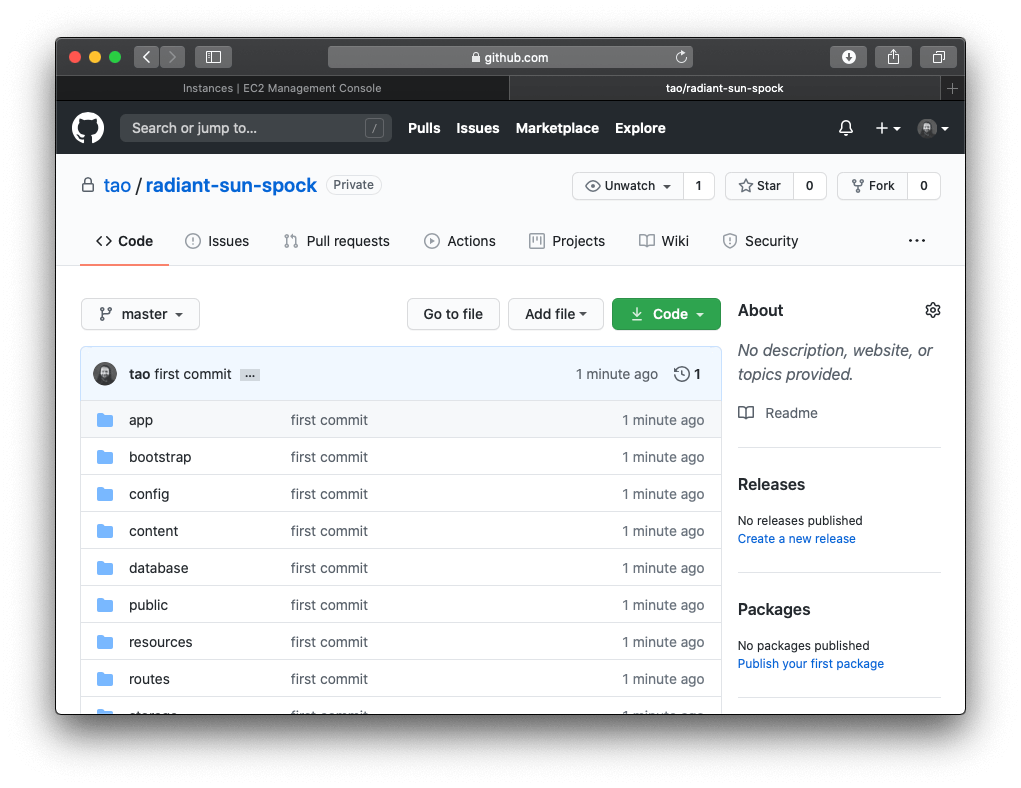 Now, log back into the server if you need to and let’s add the keys to GitHub. For the tutorial I’m just going to cat the key and paste it.

As we want to use Spock to push back changes to the Git repository, we also need to allow write access when we add the key. 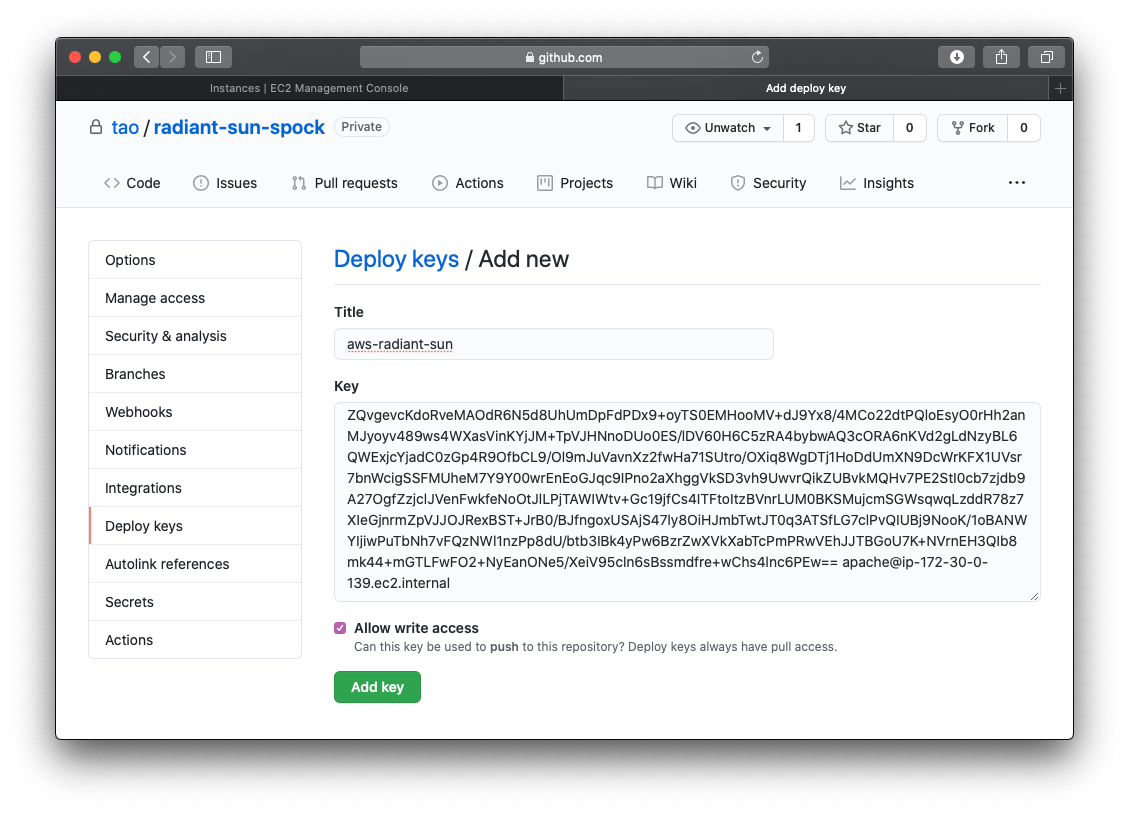 Now let’s set up the ssh configs on the server

Add these configs to our new config file:

Now comes the magic command to make this all work. Since Apache owns our website, and runs the git push when we make changes on the Statamic Control Panel, we need apache to make the connection to Github. It’s important to run this step so that the known_hosts file is created. 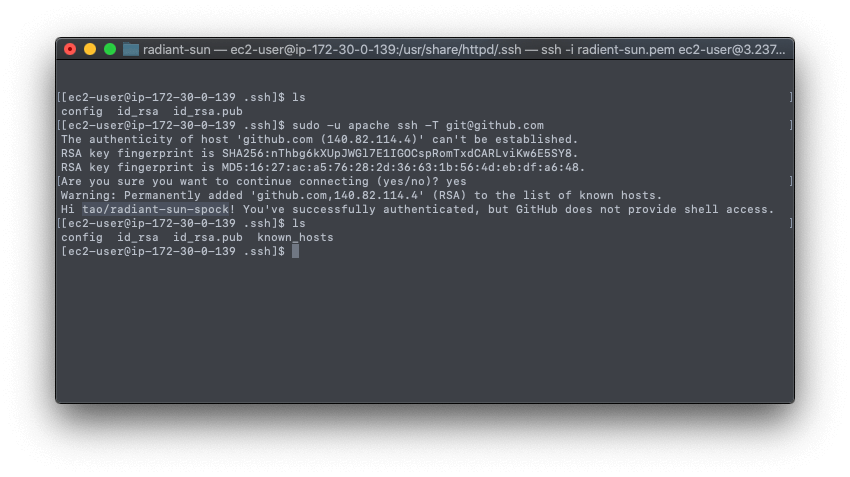 If you’ve done everything correctly so far, you should see that Github authenticated our apache SSH key and creates the new known_hosts file.

Now we have our /usr/share/httpd/.ssh folder which has all the SSH configs for apache, and is correctly authenticated with GitHub… and we have our default ~/.ssh folder owned by ec2-user which still allows us to SSH into the machine with our radiant-sun.pem key pair we created earlier.

You can confirm this by checking the ~/.ssh folder permissions. 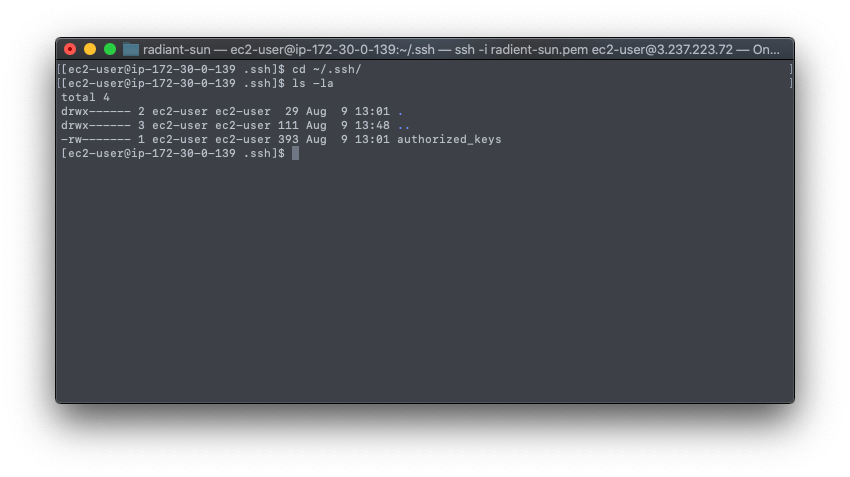 Now let’s clone the private repository of Cool writings from Github and set-up our website.

You might expect this to work but it won’t unfortunately we have a very tricky issue EACCES: permission denied to overcome first.

Now try it again and it should work fine.

If you still have problems: try add the ec2-user to the apache group:

Add this to the bottom of /etc/httpd/conf/httpd.conf

Then add this to public/.htaccess under “RewriteEngine On” (if it doesn’t exist yet)

You can then edit public/.htaccess for any additional changes.

If you visit our site now, you should see an error about our Apache folder permissions: 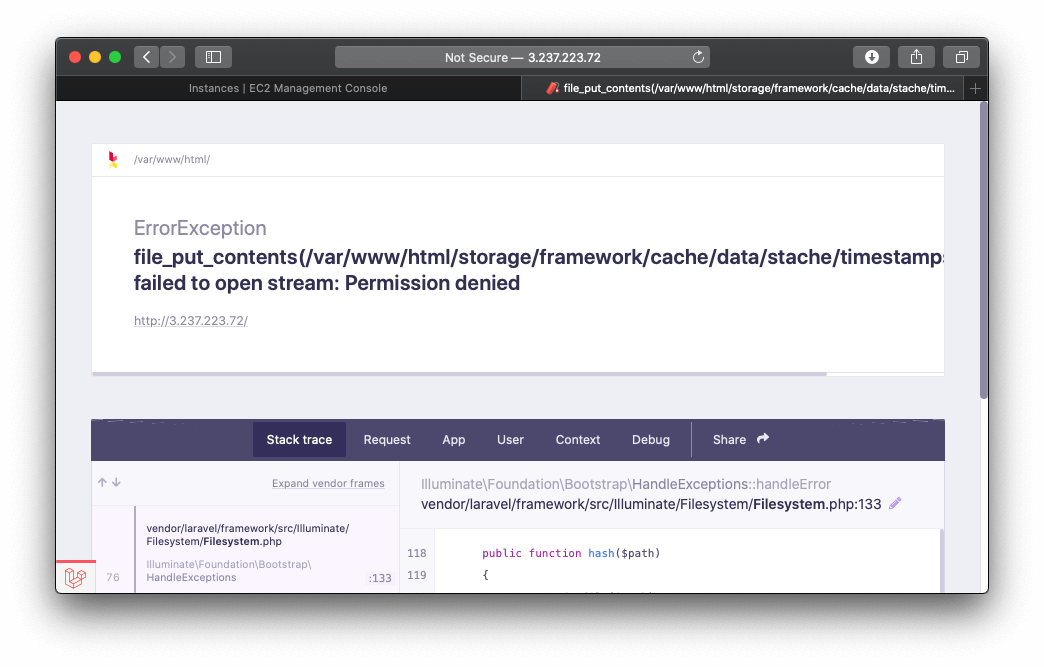 To resolve this for now, let’s use this to fix the permissions of the storage folder: 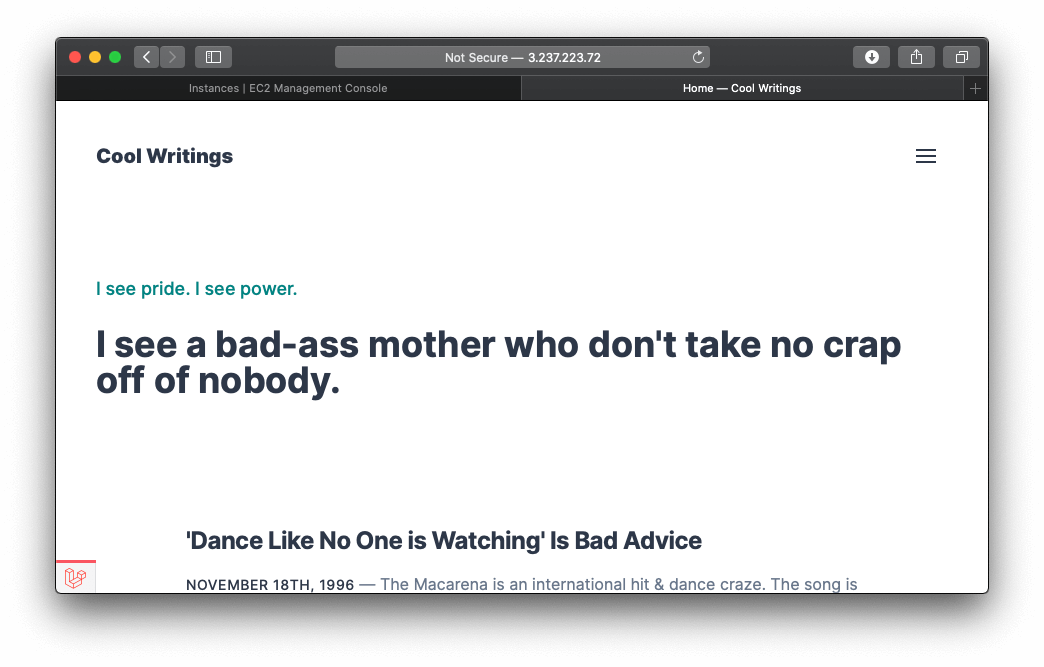 If you are back in the /var/www/html folder and run git status you might notice some files have changed or been modified… for instance we added RewriteBase / to our .htaccess file. To start with a clean slate, let’s commit and push these changes.

But first, we need Statamic Pro enabled if we haven’t done so yet. So add this to config/statamic/editions.php.

And update the .env file according to the Statamic Git Integration docs, and it’s best practice git ignore the .env!

Since we set up the SSH keys before, if we make a change on the CMS we should see Statamic push this to GitHub.

Now, there may be a bit of a delay before Statamic actually pushes to GitHub, so give it a few seconds before you check, and maybe longer depending on the type of queue and size of the website. 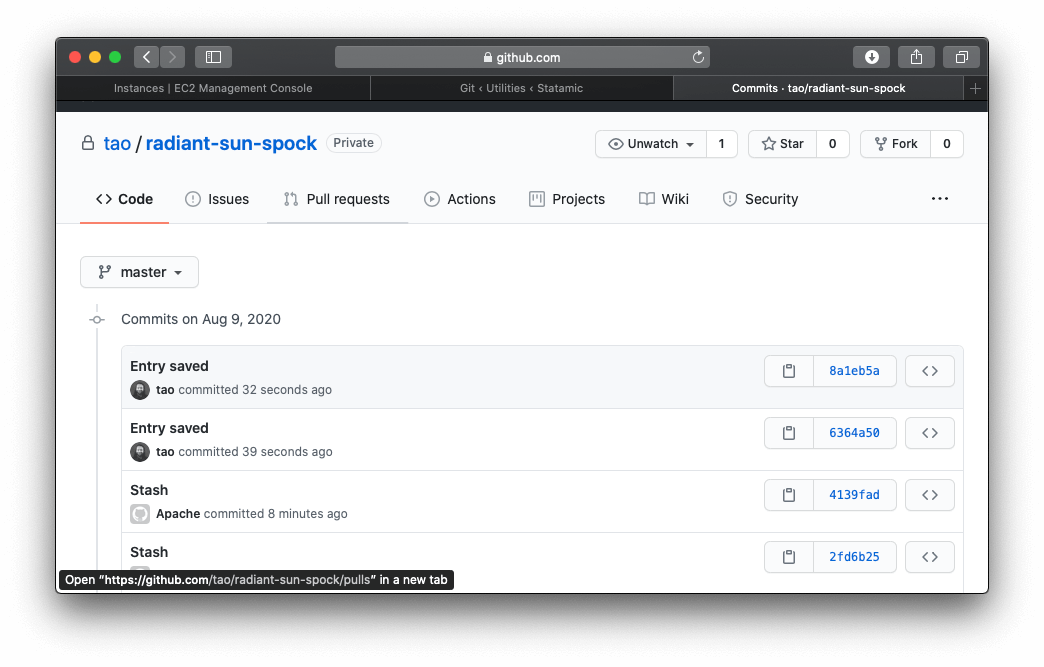 And there you go… Statamic automatically detected the changes for us and pushed to GitHub. Now there’s still some work to do so Spock can use the correct Author name, and we need to work on a pipeline to deploy changes back to EC2 when you merge pull_requests onto the master branch, but so far our Git Integration is working well. 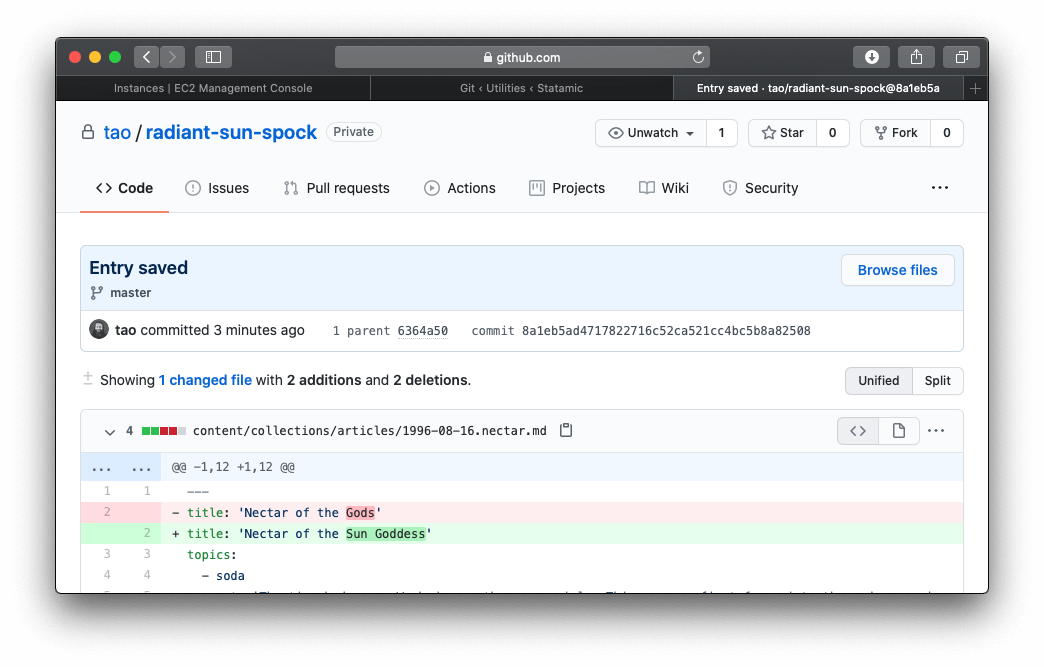 When a pull request is merged onto the master branch, we want the website to update the changes. I have set up a simple script to run using GitHub webhooks to allow the code to update itself. While not related to the tutorial, there are some permission issues that are still unsolved: trying to get the apache user to run npm and yarn commands.

As a brief example this is my deploy script:

When a webhook is received from GitHub, we validate to ensure it’s from a closed pull request and the shell script is run as a background process that lets the code self-update.

This works fine for my example, but a bit difficult to get set up initially trying to debug and configure everything correctly… as you can’t pull a new script if the old deploy script isn’t working correctly.

As you can see the script doesn’t call npm install or npm run prod because of a permission issue where npm and nvm make it difficult by design to allow other users to run these commands. So to overcome this I generate the stylesheets and assets with a GitHub action during testing and deploy them to my S3 bucket.

We installed mod_ssl earlier with Apache, now we can enable it.

Your instance now has the following files that you use to configure your secure server and create a certificate for testing:

This generates a new file localhost.crt in the /etc/pki/tls/certs/ directory. The specified file name matches the default that is assigned in the SSLCertificateFile directive in /etc/httpd/conf.d/ssl.conf.

Open the /etc/httpd/conf.d/ssl.conf file and comment out the following line, because the self-signed dummy certificate also contains the key. If you do not comment out this line before you complete the next step, the Apache service fails to start.

If the website works on HTTPS, we can now obtain a CA-signed Certificate. You can follow the steps here: https://docs.aws.amazon.com/AWSEC2/latest/UserGuide/SSL-on-amazon-linux-2.html

We will use Let’s Encrypt Certbot.

First, point your domain name to the website if you haven’t already, because the Let’s Encrypt bot checks against the domain name, and then follow the Amazon instructions to set up the certificate. It only takes a few minutes after the domain is correctly pointing at your site.

Remember to remove HTTP access on the AWS security group.